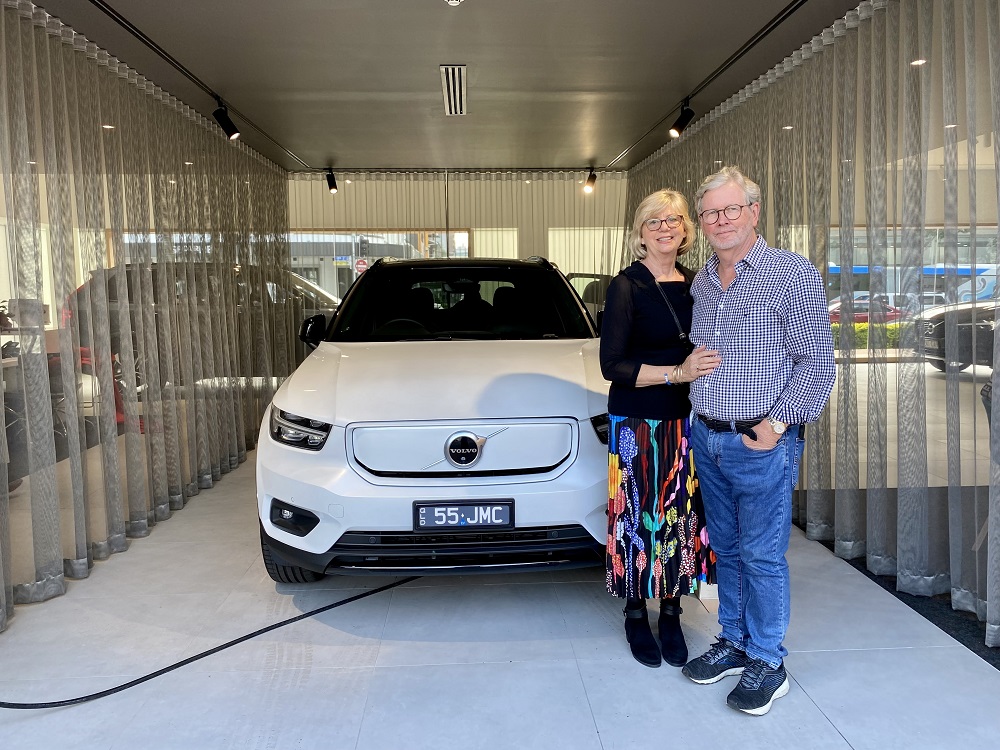 Volvo Cars have long been the go-to car for comfort & safety and the launch of full-electric car technology on Queensland shores will change the way you move forever. This means no tailpipe emissions while driving, just pure electric progression which is safer for not only you but for the planet.

“This is what the future of the automotive industry looks like. They’re simply outstanding vehicles,” says Stephen Connor, Managing Director Volvo Cars Australia. “We’re all in for the electric future, and the XC40 is just the start.”

And on Friday 3 September 2021, Volvo Cars Brisbane North customers, Janet & Chris were amongst the first owners in Australia to drive home in the new XC40 Recharge Pure Electric from our experienced Sales Consultant, Wade Bass.

And whilst the couple has never owned a Volvo previously, they were inspired by Janet’s sister-in-law, who purchased a plug-in hybrid variant earlier in the year, to make the switch into a safer future for everyone.

Janet also explains to us, that “my children are all ‘greenies’ and good advocates for the land and by changing into an electric vehicle we feel that we are starting to do more for our part for our planet to provide a greater future for our grandchildren.”

The retired couple who live on acreage at Eaton's Hill said, that “whilst we originally ordered the XC40 Plug-In Hybrid, we decided to go with the Pure Electric model as the full electric range of over 400km per charge was much more attractive than going between electric and petrol.”

Plus good things have definitely come in three's this week for Janet who firstly had her birthday, and then for an amazing birthday present, her 4th grandchild was born on her birthday, and the icing on the cake for this week, was taking delivery of the first XC40 Recharge Pure Electric in Queensland. Chris & Janet joked “we even bought a lotto ticket this week because our luck was so good!” The Volvo Cars Brisbane North team will check in on them on Monday, as coincidentally, upon driving their car out of the dealership, ABBA’s Winner takes it all came over the showroom’s music channel, so the odds may be in their favour!

And whilst Janet is still tossing up a name for her new Volvo, which may be between Iced Vovo or Violet because it looks so cute or Vroom has her grandkids would prefer as it goes from zero to 100km/h so fast, the Volvo Cars Brisbane North team know that she has made an exceptional choice as the future is electric for everyone’s safety.